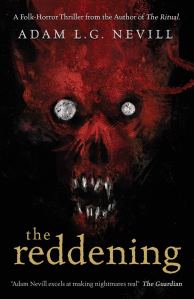 When a stack of human remains and prehistoric artefacts is discovered in the small town of Brickburgh, a media circus descends upon South Devon. One of the reporters pressed into service is lifestyle journalist Katrine, who has escaped her traumatic past by moving to the sedate environs of the Westcountry. Meanwhile, single parent Helene also finds herself drawn to Brickburgh – haunted by the subterranean recordings her dead brother Lincoln made six years earlier. The deeper the two women dig, the more myth and reality start to blur in this sleepy corner of Devon. Are the rumoured disappearances – dating back decades – connected to the shadowy drug plantations? Or are they related to sightings of the mythical ‘red folk’? Or is the truth too hideous to contemplate?

Earlier this year I was walking the coastal path between Paignton and Brixham – a walk I have done dozens of times – when I got distracted by my phone and ended up straying off the beaten track. Unconcerned, I trudged ahead into a ravaged section of landscape I had no recollection of ever seeing before. I felt suddenly disorientated, but unable to turn back. I carried on for another five minutes – each step stranger than the last until something in my mind snapped like one of the rotten branches underfoot and I hastily retraced my steps, through tangled foliage and across uprooted tree trunks, and re-joined the coastal path. I was so unnerved that I joked to some friends that evening that I briefly felt like I had stumbled into a scene from The Ritual! Not long after, I started reading The Reddening. Suffice to say, as a South Devon resident this book had an extra charge for me!

Most Devon horror stories begin and end on Dartmoor, so from the outset The Reddening feels like a particularly refreshing curve-ball of a story. Nevill has an impressive knack for bringing the coastal paths of Devon to life – and imbuing them with a sinister, otherworldly energy. His hyper-literate writing style is queasy and immersive at the same time and adds to the sense of slow building dread. He also shifts gears effortlessly. Whether veering into subterranean folk-horror or gruelling survival thriller territory, the action is always utterly convincing. In addition, all of the main characters and supporting players have meaty, convincing back stories and never feel like unfinished sketches.

Suffice to say, The Reddening is one of the best novels I’ve read in the last year – a fantastic achievement, and a book squirms with the kind of rotten scenes that live long in the memory. There are insidious horrors lurking amongst the mud, shit and foliage in South Devon. I dare you to take a closer look.