Rusty Barnes will be familiar to many of you through his short story output and his website Fried Chicken and Coffee. He is about to make a dent in the crime fiction landscape however, with his new novel Ridgerunner, which was published by the excellent 280 Steps earlier this month. Tom Leins caught up with Rusty to discuss authenticity, carnage and work ethic.

Firstly, can you tell us a little bit about the book’s setting? The natural gas industry looms large in the background, but doesn’t dictate the plot. Was this a conscious decision?

The natural gas industry? Yes, it was a conscious decision. The gas industry is what everyone talked about for a few years, and it has changed the area where I grew up for the worse. There are people, even in my extended family, who took the industry’s money to lease their land, but I’m not sure the money is worth what happened to the place. It seems now as if the gas companies took what they wanted and left the water table fucked and left the fracking water, heavy with chemicals, to drain wherever they wanted with little to no regard for the consequences.

The backdrop felt very authentic. How much of the location is real, and how much is imagined?

The setting is based on the geography of my hometown, Mosherville, Pennsylvania. I added a mountain, named Stark Mountain, and an unnamed river a few miles away, but if you wanted to find the towns I’m basing the books on you could do it pretty easily. I’ve played fast and loose with a lot of details, though, based on what the narrative needs.

One of the most interesting elements of the book for me was the way that Matt’s family is placed at the forefront of the narrative. So many crime novels favour the amoral loner as the protagonist – was it a deliberate choice to depict the very real impact of Matt’s actions on his family?

No crime is ever committed in a vacuum. These killings and robberies and drug deals have a human impact, and a lot of crime fiction, as you say, features amoral loners who seems to have no relations other than the women they fuck. I wanted the importance of family and connections to weigh heavily on Matt’s mind as well as the other character’s actions. Those connections continue to matter in the next book featuring Matt.

The physical carnage was much more difficult for me. Emotional carnage I’m familiar with. The physical aspects of it, fight scenes and the like, have not been a part of my life since my teens, and I really had to stretch myself for some of it. Having said that, action is so much fun to write. If a character needs an ass-kicking, he gets it, in my books. If all else is failing in a narrative, if a writer gets stuck, blow something up, literally or metaphorically.

How intricate is your planning? Do you map your storylines out in advance, or do you just start writing and see where the narrative takes you?

I write by the seat of my pants. I don’t know what my characters will do until they do it. I try to write, when I’m actively writing, a thousand words a day. I stop when I’m still going well, as Hemingway advises us, and I write notes as to what happens next in the narrative in capital and block letters, at the end of what I’ve written. That’s the extent of my planning.

What do you hope people take away from the book?

I hope they think it was a good story. I’m not saving the world with this fiction, I’m trying to write something that entertains in the way Graham Greene made distinctions between his novels and entertainments.

You seem like a pretty prolific writer – have you always had the same work ethic?

I’ve always worked hard at writing, but my 20s and 30s were spent just living, pretty much. I couldn’t write a novel to save my life. I tried and failed maybe six or seven times, but I wrote four or five hundred stories during that time, about half of which have been published. So I was always writing pretty well, but couldn’t seem to manage a novel. Then I turned forty. I had writing goals I’d wanted to meet before thirty, and I had only reached one of them by the time I was forty. Halfway done, in other words. I finished my first novel then, and wrote a huge number of poems. It took me several years to publish that novel, Reckoning. I tried for agents large and small and no one took a chance on me until David McNamara, from sunnyoutside press. He published my first three books. Then I rediscovered crime fiction and began to write it exclusively. I’ve written five short novels since then, and they’re much better than what I wrote before. I seem to have a knack for novella/short novels of 40-45,000 word novels.

Who, if anyone, do you consider to be your literary contemporaries?

I like a lot of writers in the small press, but have a special fondness for Jake Hinkson’s work wherever he publishes it. I also like what Garnett Elliott does in his Jack Laramie Drifter Detective novellas. Anthony Neil Smith’s Billy Lafitte series is great too.

Your publisher, 280 Steps, has carved a solid reputation for itself in a relatively short time. Do you have any favourite books among their back catalogue?

Are there any other independent publishers that you gravitate towards?

I read almost everything All Due Respect, Beat to a Pulp, 280 Steps and One-Eye Press publish. Also, Broken River Books and Blasted Heath.

Finally, what are your future publishing plans? Is it true that Ridgerunner is the first part of a trilogy?

A sequel to Ridgerunner, the Last Danger, comes out in Winter 2017. I also have a third book in the series completed, called Apocalypse Money. If they sell, I’ll do more.  Also, Travis Neisler from Ravenwood Quarterly is doing another book of mine, a limited edition hardcover novel-in-stories about a Croatian enforcer named Kraj. I have another novella called Knuckledragger making the submission rounds, and I’m halfway through a short novel about a man who’s struggling with both his marijuana grow and his father’s slow but merciless progress toward death from leukaemia. It’s crime fiction that’s about family ties. 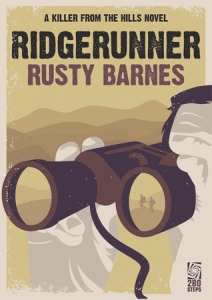 Investigating a deer-poaching incident, wildlife conservation officer Matt Rider finds himself at loggerheads with members of the renegade Pittman family, and ends up with a broken ankle and multiple bullet wounds for his troubles. When a large sum of money belonging to enigmatic clan leader Soldier Pittman goes missing at the crime scene, he is convinced that Rider stole it, and the threats come thick and fast. The incapacitated Matt taps up his trusted brother Randy for help in unravelling the mystery of the missing money, but the siblings underestimate the violent lengths that Soldier Pittman will go to in order to get his cash back, and the two families are set on a bullet-strewn collision course.

Ridgerunner is a grit-streaked thriller set against the backdrop of northern Pennsylvania. The acute sense of place is married to a bone-weary prose style, and Matt’s unease is palpable as he hobbles through the winter mud in search of his unknown enemy. Prime antagonist Soldier Pittman is a menacing, untouchable bogeyman-type figure, and his elusiveness adds to the murky sense of dread that Barnes teases out of the plot.

To his credit, Barnes tweaks crime conventions by foregrounding Matt’s family, and each one of his increasingly desperate decisions causes serious problems for his wife and teenage daughter. What unfolds is an unflinching examination of the sordid reality of killing, and Matt’s physical and mental disintegration is confidently handled throughout.

If you like your rural thrillers textured and intense you won’t go far wrong with Ridgerunner. Great work.

If you cut Paul D. Brazill he would almost certainly bleed noir. Tom Leins caught up with Paul ahead of the release of his new short story collection, The Last Laugh (All Due Respect), to discuss Englishness, influences and future plans. Check it out, and see why everyone is going nuts over Brazill!

How the devil are you?

Fine, but not that dandy. Not at my age, anyway. It does your back in.

You are an enthusiastic promoter of Brit Grit in all its forms. Who are your favourite British writers? Dead or alive? Crime or otherwise?

If you could recommend one British crime novel that people are unlikely to have heard of, what would it be?

Night And The City by Gerald Kersh. It’s one of the books that I use as a touchstone.

The indie crime scene in Britain is in rude health at the moment. If you had to hand-pick a squad to stage an assault on the literary mainstream, who would you select and why?

I really think Nick Quantrill deserves greater mainstream success and is hopefully on his way there with his new novel The Dead Can’t Talk. Seth Lynch’s Paris set historical crime novels – such as The Paris Ripper – should be BIG! Nigel Bird is on his way to greater success with The Shallows, and rightly so. It’s great.  Tess Makovesky has a sure fire hit on her hands with her forthcoming book, Raise The Blade.

Your stories wear their Englishness on their sleeves – is it harder to tap into that mind-set now that you are based in Poland?

I think it’s easier with the distance, to be honest. I don’t write journalism and I suspect the Englishness in my stuff isn’t the England of today, though. More of a mish-mash of hazy memories and hazier imagination.

This year will see you publish a short story collection (The Last Laugh) and a novella (Cold London Blues). Commercial concerns aside, do you prefer to write shorts or novellas?

I have no commercial concerns with writing! I don’t sell enough to care.  I like to read and write both and have no real preference, but I really like writing flash fiction.

Your new collection contains stories that were initially published by the likes of Shotgun Honey and Near To The Knuckle. Are there any defunct crime fiction sites that you miss?

There are lots: Powder Burn Flash, Thrillers, Killers n Chillers etc, but Chris Grant’s A Twist Of Noir is always close to my heart. I really think Chris should put together an A Twist Of Noir anthology.

The Last Laugh is being published by the always-impressive All Due Respect. If you could have a book put out by any crime publisher past or present, who would it be?

There are lots of cool publishers out there but certainly New Pulp Press have published some of my favourite crime fiction books: Jake Hinkson’s ‘Hell On Church Street’, for example.  But I’m very lucky with publishers: ADR, Caffeine Nights, Untreed Reads, Number Thirteen Press, Artizan – all class acts.

Speaking of All Due Respect, do you have any favourite books in their back catalogue?

I really like everything they’ve published that I’ve read. But Alec Cizak’s Crooked Roads collection is a particular gem, as is William E. Wallace’s Dead Heat With The Reaper.

Finally, what else is sloshing through your creative pipeline? Any books on the cards for 2017?

I’ve two more novellas on the go. One is pretty much finished. It takes place in England and Poland. I’m still deciding on a title for it at the moment but it will probably be called Going Underground.

The other one takes place in the US, England and Spain.  It’s provisionally titled A Rainy Night In Soho.

There’ll be plenty of flash fiction popping up online this year, too. I love reading and writing flash.