Publisher: All Due Respect (an imprint of Down & Out Books)

Sunk Costs is the story of Dan, a young drifter looking for a ride east. When a strange woman in a business suit picks him up on the highway, he thinks that his luck is in. Before too long, however, she has pulled a gun on him and suckered Dan into participating in an improbable scam to rip off her former employer. Intrigued by the prospect of making some fast money with a little casual deception, Dan throws himself into the woman’s scheme, only to have his head turned by a sultry accountant with an appealing counter-offer – before he even leaves the building!

Sunk Costs is a tightly plotted and satisfyingly duplicitous thriller. Lang’s writing is crisp and clean throughout, with some enjoyably dry one liners, and his style suits the subject matter perfectly. Dan is a great character: a resourceful slacker with few morals, who is seemingly unfazed by anything the increasingly bizarre situation throws up. Plus, he enjoys some nice interplay with his off-kilter partner-in-crime Kate (the aforementioned accountant), as the duo fumble their way through scattered clues in search of their elusive pay-day.

The tone is offbeat, without ever lapsing into madcap, and while their exploits sometimes lack a genuine sense of threat from the other interested parties, Lang has enough surprises up his sleeve to keep you on your toes. If you are looking for a smart, unusual, contemporary con-man caper, then you won’t go far wrong with Sunk Costs.

Next up in The Interrogation Room… Tom Leins catches up with Chris Orlet to discuss his new book, A Taste of Shotgun (All Due Respect).

Congratulations on the publication of your new book! How would you pitch A Taste of Shotgun to potential readers?

I hope A Taste of Shotgun appeals to readers who like their fiction pulpy, dark and with a dash of absurdist humor. A few readers have compared the book favourably to the works of Jim Thompson and Jason Starr. I hope they’re right.

What do you hope readers take away from the book?

I hope it makes them think, as well as entertains. If the book has a theme it is about survival and how close to the edge so many of us are living, and what we have to do these days to stay afloat. How one little thing, an illness or an accident or an arrest for speeding, can lead to disastrous consequences. How the game is rigged for the few, against the many and no one seems to notice or care. In other words, it’s a goddamn laugh riot.

The blurb on the front cover namechecks the 1970s – do you have a favourite decade for crime fiction?

There will never be another time like the era of the great pulps masters, the 40s and the 50s. Jim Thompson, David Goodis, Charles Williams, Harry Whittington, Charles Willeford, Gil Brewer. They are the giants on whose shoulders we stand. Or would stand on if they weren’t falling down drunk all the time.

If you could recommend one crime novel that people are unlikely to have heard of, what would it be?

Peckerwood by Jedidiah Ayres. Okay, so people reading this blog have probably heard of it, but people who read this blog have heard of everything. So yeah, Peckerwood. The story explodes off the page with an unforgettable cast of shitbirds, corrupt lawmen, ex-bikers, backwoods babes, Memphis drug dons and a dogged states attorney out to make a name for himself by bringing down a crooked lawman. I might also mention that it is laugh out loud funny.

This book was published by All Due Respect; do you read mainstream crime fiction, or are your tastes firmly rooted in the independent scene?

Both, but I do try to keep up with most of the new books that Down & Out & company is putting out because they are just an awesome publisher. Without them we’d all be reading David Foster Wallace and Italo Calvino and William Gaddis and Julio Cortázar. I’ve read them, and trust me, it’s not fun. So buy Down & Out’s books while you still can, dammit.

Which contemporary writers do you consider to be your peers?

I don’t think they’d want to be associated with me, whoever they are. But they are probably the writers who publish with All Due Respect and Down & Out Books. Maybe Broken River. Those weirdos.

I am working on the third or fourth draft (I lost count) of two more crime novels. One, called Love and Other Dead Things, is a straight-forward noir. Maybe too straight forward for the Me Too Generation. Might have to tweak that some more. The other, Leadwood, a twisty crime novel, involves the klan, a St. Louis billionaire philanthropist, and a couple of snoopy reporters and is set in the Mark Twain National Forest. (Go look it up.) I hope to finish both by the end of the year.

Chris Orlet is the author of A Taste of Shotgun (All Due Respect) and In The Pines (New Pulp Press). He lives in Saint Louis, Missouri with his wife and daughter.

Buy A Taste of Shotgun

Next up in The Interrogation Room… Tom Leins catches up with David Owain Hughes to discuss his new book, South By Southwest Wales (Darkwater Syndicate). 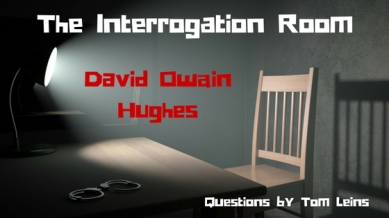 Firstly, how would you pitch South By Southwest Wales to potential readers?

I think Richard Ayre’s full blurb will sum this question up nicely:

‘Samson Valentine. Once the best gumshoe in the city, but now little more than a washed-up has-been. The question is, though, which city? And when?

Owain-Hughes is probably best known for his horror stories, but South by Southwest Wales showcases the sheer versatility of this brilliant writer, and the detail of both setting and characterisation combine to make one hell of a good read. In Samson Valentine, Owain-Hughes has created a classic flawed hero. A man who is inherently good in a world that has turned bad. And when things get personal, Valentine shows that he is not a man to cross.

In South by Southwest Wales, David Owain-Hughes presents us with a pure gem. Part Noir detective thriller, part insight into the dark world of alcoholism. This is a fabulous story that weaves its way seamlessly from 1940’s Chicago to modern-day Cardiff, thanks to the fractured mind of its main character.

I can’t think of a better evening than to sit in the pool of light from a shaded chintz lamp, sip a single malt, and get lost in South by Southwest Wales. Pure magic.’

What do you hope that readers take away from the book?

A deep-rooted love and admiration for Samson Valentine, for he’s a man who manages to turns the table on his shitty luck, crawling out of a gutter he’s found himself in. He fights for his life and those he loves, as he battles alcohol abuse, depression and personal demons. I hope his story will inspire others. Sam, a bloke with a set jaw and an iron will, will show what one person can do with a heart and bellyful of determined. Nothing is impossible.

The bulk of your work to date has been within the horror genre. What prompted the switch to crime fiction?

I’ve had a thing for crime fiction for many years – especially 1930’s/40’s gangster crime – and so it came as no great shock to me that I wanted to produce a book within the crime/noir/detective genre. I also have a keen interest in detectives/P.Is, as they’re almost always portrayed in films/books/TV shows as lonely individuals – an aspect I love exploring when building my own characters.

However, I think the biggest prompt for me to write such a book, was to show people I’m not a one-trick pony; that I can write other things too, not just blood, guts and perversion. I had a golden opportunity here to explore some dark, interesting things, such as Sam’s delusional state of mind and hard-drinking habits.

Are the two genres uneasy bedfellows, or do they feed into one another?

A bit of both, I think. I’ve never once though the two genres stood worlds apart and sometimes live in each other’s backyards. Just like horror, crime deals with real-life monsters, the human condition and whole host of other subjects – some taboo – a lot of writers wouldn’t touch if their lives depended on it.

Do you read mainstream fiction, or are your tastes firmly rooted in the independent scene?

Mainstream, although I do occasionally dip my toe into in the independent scene. I love how bold some indie authors are, especially those who write extreme horror, who mostly leave nothing to the imagination. They are fearless, holding nothing back, and that’s how art should be, right? I know a lot of people don’t like lots of detail, but I do. I don’t want the monster hidden or the gore toned down. I want to see, feel and breathe a character’s pain in every detail as they’re mutilated, fall from grace, drink themselves into a black hole or some other nasty subject that rips a person apart, whether it’s from limb to limb, or from the soul outwards.

Who are your prime influences?

Richard Laymon, Jack Ketchum, Bentley Little, Shaun Hutson, James Herbert, Guy N. Smith, Robert Bloch, Richard Matheson, Ian Rankin and many others! I’d also have to add Alice Copper, even though he’s a musician, his music has inspired so much of my work over the years. It would be rude to leave him out!

Probably Richard Laymon. I have so much love and respect for him, even though I never got the chance to speak to him, and his work. He’s the reason I set out on a path to become a writer – his story triggered something within me, to get me going. When I read his novel One Rainy Night, it blew me away. I couldn’t believe there were writers out there jotting such insane stuff! Brilliant.

Do you crave mainstream success, or is developing cult status satisfying enough?

I’d settle for cult status. Definitely. However, if you’d asked me a few years ago, I probably would have said mainstream – to take my writing to the highest level possible. These days, I guess I’m more realistic. There are so many people out there writing nowadays, that getting recognised is extremely difficult.

At current, I’m taking a breather. I want to catch up with my reading and to spend some quality time with my family. I also want to push this new novel, and give it time to see how it does, before I press on with something new. When I return to the writing, I plan to write the sequel to South by Southwest Wales.

David Owain Hughes is a horror freak! He grew up on ninja, pirate and horror movies from the age of five, which helped rapidly instil in him a vivid imagination. When he grows up, he wishes to be a serial killer with a part-time job in women’s lingerie…He’s had multiple short stories published in various online magazines and anthologies, along with articles, reviews and interviews. He’s written for This Is Horror, Blood Magazine, and Horror Geeks Magazine. He’s the author of the popular novels “Walled In” (2014), “Wind-Up Toy” (2016), “Man-Eating Fucks” (2016), and “The Rack & Cue” (2017) along with his short story collections “White Walls and Straitjackets” (2015) and “Choice Cuts” (2015). He’s also written three novellas – “Granville” (2016), “Wind-Up Toy: Broken Plaything & Chaos Rising” (2016).