This month in The Interrogation Room… Tom Leins catches up with US crime writer Alec Cizak to discuss his excellent new book Down on the Street (ABC Group Documentation) – the unlikely story of a down-on-his-luck taxi driver who becomes a pimp. 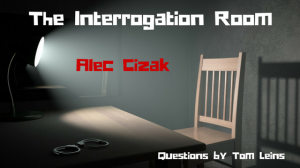 Firstly, congratulations on the publication of Down on the Street. Where did the idea for the story come from?

Thanks. I’d been throwing around the idea of a “loser” trying to be a pimp for a long time. I know they did something similar in the old Ron Howard flick Night Shift, but I wanted to take the idea just a little bit more seriously. I had a wonderful midlife crisis experience that compelled me to start writing the book back in 2012. I worked on it a little at a time for about three years before deciding I was ready to let it be.

Was the entire narrative arc planned out in advance, or did you just set up the taxi driver-becomes-a-pimp idea and run with it?

I originally had a big shoot-em-up type of plotline that I eventually scrapped in favor of the darker road the book takes. Interestingly, in making the book less sensationalist, I decided to redeem the protagonist. Sort of. I have to credit the writer Mav Skye for helping steer me in the right direction. I let her read the first half of the novella and she gave me some ideas on how to finish the book. Her ideas, in fact, were much darker than what I eventually came up with, if you can believe it.

Lester Banks is no one’s idea of a hero, and some of his choices are spectacularly bad. Was it fun to write such a hapless protagonist?

It’s always fun to write about people “polite society” doesn’t give a shit about. If these people have jobs at all, they’re usually service jobs. The middle and upper class give them a nod and a courteous smile in exchange for a task they aren’t willing to do for themselves (or maybe can’t – I’m not going to sit here and bash the upper classes, I’m not really into the “make people feel guilty” routine that’s become so fashionable with social media one thinks it might be a mass addiction of some sort; I think shaming people for having more stuff than the rest of us is tired and not very useful in the long run). But let’s be honest – the ruling classes love to talk about what’s best for the impoverished, for the doomed, as Hunter Thompson might have referred to them, but it’s all just talk. The rich will write checks and send them to charities. A few angels will actually put in volunteer time, but ultimately, people like Lester Banks and Chelsea Farmer aren’t valued beyond the work they do and the profits other people make off of their labor. I sound like a commie, I know. I’m not. I’ve actually been to communist countries and they’re awful. But at the same time, having lived in poverty for all of my adult life, I would be derelict of duty as a writer if I didn’t try to force the upper classes to take note, to attempt to understand how rough life can get in this country.

Down on the Street features some pretty twisted scenes. In crime fiction terms, how far is too far?

Well, to me, this is a freedom of expression issue. If we value freedom of expression, there is no such thing as “too far.” Now, more than ever, it’s important to fight for this. We live in a hyper-Orwellian era in which freedom of speech isn’t fully appreciated. That said, the artist must have a damn good reason for stepping over certain lines. I don’t believe in being outrageous just for the sake of shocking people. Basically, if it’s necessary, go for it.

Do you think crime fiction is too safe? Do you read mainstream crime fiction, or are your tastes firmly rooted in the independent scene?

I mostly read independent books and older crime fiction. It’s sad to say, but the older stuff, as far as books published by “mainstream” publishers, is a hell of a lot better than what they’re publishing these days. The “mainstream” publishers are no different than the music industry or Hollywood—they don’t want to take risks because there’s no more money for that sort of thing. Business people have taken over and they don’t understand the concept of risk in art; to them, not making a profit isn’t an option.

If you could recommend one crime novel that people are unlikely to have heard of, what would it be?

I guess I’d recommend Black Wings Has My Angel, by Elliot Chaze. Jed Ayres alerted me to that book a couple of years ago and I really enjoyed it.

Which writers do you consider to be your peers?

I don’t know if these guys would enjoy being called my peers, but the writers I really respect at the moment are Eryk Pruitt, Grant Jerkins, and Garnett Elliott. If I can ever produce work that entertains others the way their work entertains me, I will feel good about my writing.

I think my favorite writers are Henry Miller and Charles Bukowski. If I could get some late-in-life success to make old age a bit more tolerable, that would be just fantastic (I’m not holding my breath, though; the masses are so concerned with phony politeness these days, the kind of cynical realism I prefer to write just isn’t marketable, just isn’t vanilla enough for the Oprah book club!).

Well, I’m working on a novella about what happens to Chelsea Farmer after Down on the Street. I’m going to write a book about Lester Banks after that in which he’s hiding out in an apartment above a massage parlor in Florida (I keep trying to get away from that sort of subject matter, but I don’t see society improving any in the way it uses and abuses sexuality for profit). In the meantime, I’m revising a full-fledged novel I wrote last November. It’s somewhere between horror and what the academic folks call magical realism. I’d still like to achieve the dream I had when I was twelve years old, which was to make a living writing horror novels.

Alec Cizak is a writer and filmmaker from Indianapolis. His fiction has appeared in several journals and anthologies. He is also the editor of the fiction journal Pulp Modern. Find out more at No Moral Center.

DOWN ON THE STREET 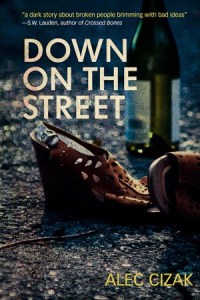 Times are tough in modern-day Indianapolis, and sad-sack cab driver Lester Banks is struggling to make ends meet: paying his rent and maintaining his hooker habit is becoming increasingly difficult… Enter Chelsea, his sexy young, nymphomaniac neighbour – a woman whose life is also about to hit rock bottom. Captivated by his new acquaintance, and spurred on by advice from a colleague with a chequered past, Lester proposes a sordid business arrangement to Chelsea: why not have sex and earn money at the same time? With him as her unlikely pimp! Unfortunately for our desperate duo, their new side-line quickly attracts the attention of a posse of crooked cops, a wealthy degenerate, and a rival pimp, and Lester comes to realise that pimpin’ ain’t easy…

Anyone who has read Crooked Roads, Cizak’s masterful short story collection, will be well aware of his knack for dark, emotive stories – in which hapless protagonists are drawn hopelessly out of their depth in their pursuit of a slightly better life. Down on the Street treads a similar path, and the author offers up an eye-opening series of set-pieces as the book unfolds. The subject matter is understandably dark – but undercut with a bone-dry sense of humour – and the lead characters, and indeed supporting players, are all convincingly depicted.

Unlike reluctant anti-hero Lester, Down on the Street is neither cheap nor exploitative. This is riveting stuff, and well worth checking out.