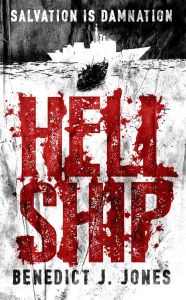 Set in 1944 on the Strait of Malacca – the narrow stretch of water between the Malay Peninsula and the Indonesian island of Sumatra – Hell Ship follows the fortunes of nine survivors of the torpedoed Empire Carew vessel, adrift and barely alive in a lifeboat. After weeks in the water – surviving on condensed milk and seagull meat – the motley crew find safe haven on the Shinjuku Maru, an abandoned ship they encounter floating in a strange fog. Little do they realise, this ship harbours a grisly secret, which will make the horrors that they have already experienced pale in comparison…

With cinematic pacing and lashings of gore, Hell Ship is a satisfyingly sinister slice of nautical pulp horror. The superb, sadistic prologue – seamen splattered everywhere – sets the tone for the unrelenting sense of dread that follows, and the novella unfolds in an enjoyably gruesome fashion. Jones has fun with the period details, and breathes new life into the familiar cast – which includes the brutally efficient, axe-wielding sailor Busby and the quivering wreck of a commanding officer, Snell.