Publisher: Near To The Knuckle 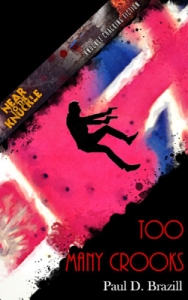 When high-class fence Leslie Hawkins meets Peter Rhatigan in a sleazy London pub, he offers her the chance to get her hands on the Totenkopfring – a legendary piece of World War Two Nazi memorabilia – which she believes she can flog on to a degenerate collector for a tidy profit. Their meeting ends in chaos, however, following a bloody altercation with a member of a biker gang – an event that sets the tone for the chaotic violence that follows.

Meanwhile over in Poland, Dr Anna Nowak finds an amnesiac Englishman half-dead in the snow, and her commitment to helping him unravel his past leads them into surprising – and similarly dangerous – territory. Eventually, the various plot strands congeal like spilled blood, and old scores are settled once and for all.

Paul D. Brazill’s Anglo-Polish caper occupies the murky middle-ground between thriller and farce. If you can imagine a Guy Ritchie film re-cast with Carry On actors, you will come close to understanding this book’s offbeat charm! Chock-full of memorable characters, and engaging set-pieces, Too Many Crooks unfolds at a frantic pace. Regular readers of Brazill’s work will lap up the wise-cracking, booze-swilling, bone-snapping story, but this novella also boasts an accessible mainstream quality that should help him tap into a wider audience.

Pay your pound, slurp the Brit-grit broth and rub up against the Slippery Pole! Great fun!